Are there still monolingual Breton speakers

The Breton (breton. Brezhoneg) is a Celtic language. Like Welsh, Kumbrian (extinct) and Cornish, it belongs to the subgroup of British languages. It is used in Brittany (France) by the britophones Breton, making it the only modern Celtic language spoken in mainland Europe. The main distribution area is the Finistère department (Penn ar Bed) and the western part of the Côtes-d’Armor (Aodoù-an-Arvor) and Morbihan (Mor-bihan) departments.

Breton is not a successor to the language of the Celtic Gauls who originally lived in the area, but the language of British refugees and immigrants from Great Britain. Breton is closely related to the British sister languages ​​Cornish (Cornwall) and Welsh (Wales). It shares a lot in common with Cornish, with which it is grouped together to form the group of Southwest British languages.

The most important characteristic of South West British compared to West British (= Welsh) is the sound change from the original British long / ɔː / (derived from the ancient Celtic / aː /) to / œː /:

However, mutual understanding is not easily possible. In the eastern departments of the distribution area, Breton has been pushed back more and more in the past centuries, partly in favor of Gallo (a Britto-Romanic dialect des langue d’oïl).

The language development of Breton took place in three periods:

Old Breton is not very well documented, as most of the written sources are likely to have fallen victim to Norman raids on the Breton monasteries (especially in the 9th century). One of the characteristics of the phonology of Old Breton is the position of the accent, which, unlike in Middle and New Breton (with the exception of the Bro-Wened / Vannes dialect), is on the last syllable.

A number of texts have come down to us from the Central Breton era, above all poems, mystery plays and religious edification literature. In the Middle Breton poetry traces of a very complicated British poetry can still be found, which can be found in Welsh (as cynghanedd) to this day and which is characterized by an interweaving of internal, end and allied rhymes and by repetitions of the consonant structure. In Breton this form of verse is called kenganez designated.

New Bretonic is characterized by a strong breakdown into dialects. It was not until the 20th century that a standard variety could emerge again - Neo-Bretonic.

The Neo-Bretonic (also pejorative Roazhoneg, see below) is an academic standard created by language enthusiasts from the twentieth century onwards. It was supposed to summarize the widely differing dialects and delete French loanwords. However, since many of the linguists involved were (and are) not native speakers of Breton, Neo-Breton has become a variant that is phonetically (and partly syntactically) much closer to French than the dialects. In particular, the word accent (on the panultima) and the sandhi, which is extremely important in Breton phonology, are often not realized. Lexically the Neo-Bretonic is consciously receltized. For example, "phone" is used in most dialects phone, in Neo-Breton it says pellgomzwhich sounds as unusual to Breton ears as the German one Telephone. Another example is mersi bras ("Thank you very much") which in Neo-Breton - based on the Middle Breton model trugarez vras is replaced. 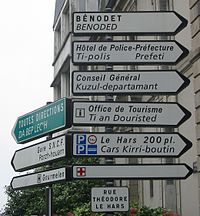 The number of speakers of Breton has decreased dramatically since the 1950s. As the French Republic does not collect the number of speakers of the languages ​​spoken on its territory, all figures are based on estimates. It is generally assumed that in 1950 around 1,200,000 people spoke Breton, some tens of thousands of whom were unable to communicate fluently in French. With the extinction of this monolingual population, a rapid transition to French began, as most Breton-speaking families began to raise their children in French monolingually to avoid discrimination in school and work life. Today the number of brezhonegerien (Breton speakers) estimated to be less than 250,000, about two-thirds of whom are over 60 years old. Only a maximum of half as many people actually use the language in everyday life.

To date, the language has not been officially recognized by the French state and was rigorously suppressed in the 19th and 20th centuries. The phase of active repression lasted until the 1960s. Even today, a letter, if addressed in Breton, is not accepted at the post office, even if bilingual place-name signs have been set up in the bilingual area for some years, but this must come from the respective municipality and does not change the fact that only the French versions continue to be used the place names are officially recognized. The language is promoted by a strong national Breton movement. There are a number of brittophones (Breton-speaking) divan schools. Also in the area of ​​Catholic private schools (Verein Dihun) and at some state schools (Verein Div Yezh) there are now classes with some Breton as the language of instruction. Currently (2005) there are 2896 students from Divan, 3,659 students in Catholic private schools and 3,851 students in bilingual classes in public schools compared to 360,000 students in purely French-speaking classes.

It has been around since 1999 Ofis publik ar Brezhonegthat works to preserve the Breton language and culture.

In December 2004, the Breton regional government announced that it wanted to promote the continued existence of Breton, which was a sensation in post-revolutionary France. Above all, the number of places in Breton immersion classes (based on the model of Divan) will be increased to 20,000 in the next few years. 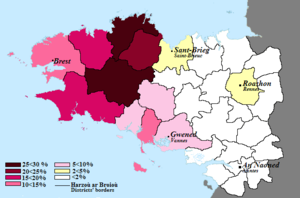 Percentage of speakers in Brittany

In 2005, Breton is only understood by fewer than 290,000 people.[1] The number of people who can actually speak it is estimated at 250,000.[2] The majority of those who still have native language skills are over 60 years old. According to a study by Fañch Broudig (Qui parle breton aujourd’hui?, 1999) there were still 240,000 speakers, a large number of whom no longer used the language in everyday life.

The problem with surveys with questions like “Do you speak Breton?” Is that the respondent's competence is not (always) taken into account. Language enthusiasts who cannot really converse in Breton give “yes” as an answer, not least by increasing the percentage of Breton speakers. On the other hand, many of the older native speakers suffered from inferiority complexes during their school days and are ashamed of Breton, so that honest answers cannot always be expected from this section of the population.

Only in a few families are children currently growing up with a Breton mother tongue. Even if these - because they are regionally widely dispersed - should form a network of speakers, the extinction of Breton as the colloquial language of a region can no longer be stopped. Although the extremely repressive laws aimed at eliminating Breton have been abolished for about two decades, the language is already so endangered that no further action is required to finally destroy it. Although there are tens of thousands of speakers who have consciously learned the language in order to preserve Breton, hardly any of them have a knowledge that equals that of a native speaker. The Breton media (TV programs on FR3 Ouest and TV Breizh, radios, magazines) are for the most part run and moderated by non-native speakers with very different levels of competence. 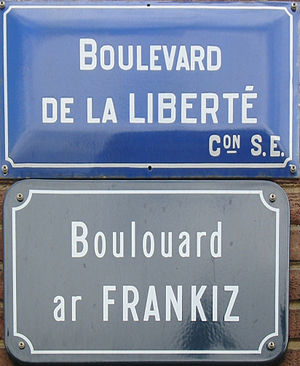 From 1985 onwards, bilingual street signs were introduced in numerous areas of Brittany following pressure from the population. This is especially true for the area west of Guingamp.

Kerneveg, Leoneg and Tregerieg (the so-called KLT dialects) are comparatively close to each other. The Gwenedeg differs considerably from these. This dialectal difference in particular made the development (and acceptance) of a uniform written language very difficult. Several spelling systems exist side by side; the most common is that Peurunvan (French Orthographe Unifiée), also Zedacheg named because of the typical use of the letter combination zh (French Zed Ache), which is pronounced as [z] in the KLT dialects, but as [h] in Gwenedeg. Another important difference lies in the word stress, which is on the penultimate syllable in KLT dialects, but on the last syllable in Gwenedeg (e.g. brezhoneg: KLT [breˈZonek], Gwenedeg [brehoˈNek]).

The traditional dialects are rapidly losing importance due to the decline in the number of speakers, while a new standard is emerging in radio and television. Since this is mainly used by non-native speakers, it is phonologically strongly influenced by French, but uses less vocabulary of French origin than the dialects. For example, traditional speakers would use the (originally French) avion use - emphasized on the penultimate syllable, mind you -, while in the standard the new creation nijerez (lit .: "Fliegerin") is preferred. Since a large part of the speakers of this learned standard, which is not passed on in their mother tongue, come from the area around and for the University of Roazhon (Rennes), this variant of Breton is also called Roazhoneg designated. This is to be understood pejoratively: since Breton was traditionally never spoken in Roazhon, dialect speakers emphasize the “artificiality” of the standard. The French influence on phonology is most noticeable in prosody: native French speakers often replace the Breton word accent (on the penultimate syllable of each word) with the French phrase accent (on the last syllable of each sentence).

The most important and productive process in Breton phonology is sandhi, i.e. assimilation processes across word boundaries. The basic phonological domain in Breton is not the word, but the phrase, the end of which is marked by hardened final voices. Within the phrase, consonants at the end of the word, followed by a vowel initial sound, are systematically lenited (softened):

In addition, there is also sandhi through provection, i.e. desonization or hardening:

The Breton grammar has a number of features that are characteristic of the island Celtic languages ​​as a whole: initial mutation and the sentence position verb – subject – object.

A characteristic of the island Celtic languages ​​are the initial mutations (Bret. kemmadurioù). These were created from historical sandhi.

The following table is intended to give an overview of the system of initial mutations in Breton. Where the respective mutation does not occur, the phrase is put in brackets.

There is also a so-called "mixed" mutation, which only affects voiced consonants after certain verbal particles:

Historically, Breton is a VSO language (verb-subject-object). The development of Modern Breton is moving towards the second position of the verb: in almost all constructions the conjugated verb is now in the second position of the sentence.An additional tendency, namely to put the subject at the beginning, is also noticeable and is explained by the generalization of old relative constructions that served for topicalization:

In general, topicalization is expressed by fronting a part of a sentence, i.e. by bringing it forward to the beginning of a sentence:

What emerges from the two example sentences is the distinction between the so-called "non-conjugated" verb form (= third person singular), which comes after the subject, from the conjugated (here: first person singular), which is in a sentence without an explicit subject . The “non-conjugated” form has historically emerged from a relative construction. The Breton verb morphology is basically simple, but its use is greatly complicated by several morphosyntactic rules.

The following pronunciation rules refer to the most common orthography (Peurunvan), which in most publications, dated Ofis ar Brezhoneg (the semi-official standardization and language planning body of the region), the DivanSchools and the University of Roazhon (Rennes).

Be at the end of the word b, d, G, j, z, zh pronounced voiceless (so how p, t, k, ch, s) unless the following word starts with a vowel. These assimilations across word boundaries (Sandhi, see above) are extremely important in all Breton dialects, as they are - similar to the German final hardening