What are some swear words in Vietnamese

There they sit.
Three young volunteers.
And a teacher almost as young.
The teacher says something.
"Between ... and ... there is a difference!"
A volunteer's answer.
"Huh? I just don't hear it. "
The laughter of the other two.
"Neither do I."

Something like that, Nour, Theresa and I feel quite often.

But stop! Let's start at the beginning. We start with the general information about Tiếng Việt, the Vietnamese language:

More than 84 million people are Vietnamese as their first language. The researchers still do not really agree which other languages ​​in the region it is related to. However, the Vietnamese language is assigned to the Viet Muong language group. Many terms have been borrowed from Chinese and the Mon-Khmer language. But also due to the long occupation by the French, some French word elements have crept in. At the train station, for example, you can read the Vietnamese "ga", which comes from the French la gare. Pretty similar, right?
In Vietnamese one can distinguish three dialects, just as the country is divided geographically: the dialect of the north, central Vietnam and the south. Like High German, Vietnam also has High Vietnamese, which was developed on the basis of the northern dialects.

Vietnamese is (unfortunately god!) A tonal language. The basics usually consist of only one syllable. Now you might think that it can't be that difficult after all. And yet you are wrong!
Each syllable has one of the six possible tones. There are differences in height, course, intensity and duration. Now it is essential to make an effort to pronounce the sounds properly, but also to hit the appropriate tone correctly. What if not? This can lead to unpleasant misunderstandings, as many of the same syllables with different tones have completely different meanings.
Let's take the word “bo”. It can be beef (with Pho Bo, if you pay attention, you know what's good), father, lover, throw away, butter, ministry or avocado. Now imagine the embarrassing situations you can slide into, especially with a lover and father ...

To compensate for this, I can tell you that the grammar in Vietnamese is much simpler than in German (it would hardly be more difficult). It follows the strict rule of subject - predicate - object. Even with difficult forms like past perfect, future 2 or simple past tense you don't have to deal with it. The tense is only made clear from the context or through certain words (such as yesterday, tomorrow).
There are also no special forms in the plural (like the apple -> the apples). Counting unit words are used to make the number of things clear. Beautiful or?

I still find that particularly fascinating: Originally, each word in Vietnamese only had one syllable. Over the years, however, two-syllable words have crept into the vocabulary of the language. Let's take the word: chó. If one speaks of the dog as an animal, one says con chó (animal + dog). However, if you want to order dog meat in the restaurant - at this point the note that I have never done it! But I've already seen dog on a spit - they say thịt chó (meat + dog).

A little more about the font: Take a look at the title of my blog! Not that big of a difference to our font. It used to be different. During the Chinese occupation, Chinese characters were used. At the end of the 1620s, however, the missionary Alexandre de Rhodes came and quickly converted the Chinese characters into Latin letters. But he also had to pay attention to the Vietnamese pitches. For this reason he used the usual diacritical marks in Greek and inserted them in such a way that Vietnamese could now be read.

The Vietnamese alphabet has a total of 30 phonetic signs. Many are pronounced as in German. Unfortunately not all of them, which makes the whole thing really difficult.

And there we are already at the point. Vietnamese is really difficult!
I can't even tell you what exactly makes language so difficult. Maybe it's just the combination of a lot of different things:

Of course, I can read a text as if it were a German text and with a lot of noise I can also use the correct accentuation. But mostly it just doesn't fit.
Of course I can try to remember the words. But mostly it just doesn't work out. The vocabulary is just so far removed from German, English or Latin that I can't make any connections.
Of course I try to learn the word order in the sentence. But most of the time it just doesn't stay in your head.
Of course, I try to hear the differences in four different "bo" s. But mostly I don't hear it. Even after the tenth audition by Van, our dear Vietnamese teacher, the “Huh? I don't hear it! "

Probably the most disappointing thing is and remains the fact that many Vietnamese - at least I strongly suspect - do not want to understand me at all. When I ask about the price in Vietnamese in the restaurant and I feel really great and the waiter simply answers in English. You really have no idea how disappointing that can be. 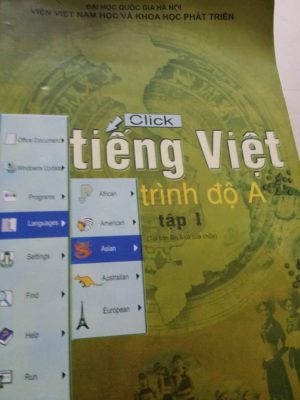 And yet I can proudly say that I also enjoy the language.
When a waiter answers in Vietnamese. When an old man asks where you come from at Hoan Kiem Lake, you understand the question and can still answer. When you can order your food on your own and often even understand what you have just ordered. When you finally know what man and woman mean in Vietnamese and you can be sure of choosing the right toilet. If you understand familiar words in conversations with the students and they will confirm that they are correct when asked. When you can finally tell the Uberdriver the street and house number in Vietnamese and he understands you (they haven't had them for a long time, but now I've got the hang of it). When there are many many students around you explaining the Vietnamese homework to you and wanting to teach you as much as possible with great enthusiasm. And also when a student - very mysteriously and whispering so that the teacher doesn't get wind of it - teaches you a really terrible swear word and grins enthusiastically if you have pronounced it correctly.

The most beautiful thing so far, however, has been an experience in a tenth grade and when I think of it, a smile comes back to my face: for an hour after the semester exams, the students repeated how to properly introduce themselves in German with name, age, Family members, hobbies, ...
Now, of course, I can do that in German too, but German is "boring". So why not in Vietnamese? After I suggested this to the teacher and I got up with her permission, the big moment had come and I started with “tôi tên là Sophie” and the whole class cheered and applauded. The remaining sentences went on like this and when I was finished and the lesson ended, I was able to look forward to more beaming faces and a few "goodbye" ’s more than normal.

That is exactly the thing, that you show respect for the country in which you temporarily live, whose culture you want to experience, whose people you want to get to know. I think it is the minimum for me to learn this language at least in its basics. At least so far that I can do a little convergence and show the person my interest and my appreciation for their country. And also my love for the country. I can proudly say:

Greetings from Sophie, who is hard-struggling with the Vietnamese language