Who divided the Roman Empire in half

Due to the storms of migration and the internal political turmoil of the "Imperium Romanum", the division of the Roman Empire took place in 395 after the death of the emperor Theodosius I into a western and an eastern half, in each of which an emperor resided. 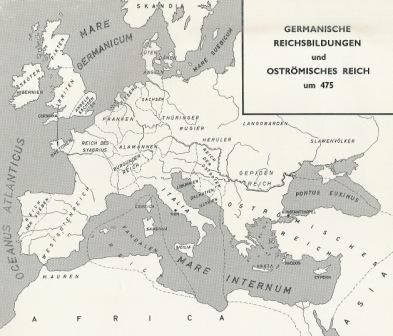 The idea of ​​distributing power in the Roman Empire among several rulers to whom different regional areas of responsibility were assigned was old: Remarkably, the dividing line 395 ran almost exactly where the border between the areas of power from almost 450 years earlier Octavian (Augustus) and Marc (-us) Anton (-ius) had been set. By the 3rd century at the latest, this idea was under Kaise Valerianwho ruled himself with his Soh Gallienus divided and assigned to this the western half of the empire, has been taken up again. In late antiquity was since Diocletian the multiple empire has become the rule and everything indicates that the division of 395 also belongs in this series. Even after that year that formed Roman empire still a unit under constitutional law; the image of the emperor of the other half of the empire was in the senate curiae of Rome and Constantinople, the vast majority of laws applied across the empire, and it was not uncommon for an emperor to intervene in the politics of the other half. There were also some joint military operations. For technical and administrative reasons, you had two rulers Augusti had to distribute, there was obviously no thought of splitting the empire into two independent halves.

In retrospect, the division of 395 was nevertheless of some importance - because the Western Roman Empire was extinguished in 476/480, before one single rule again Augustus could have come, it turned out to be in fact final. Quite a few ancient historians are of the opinion that already in the course of the 4th century a stronger cultural, religious and economic divergence between the Greek-influenced East and the Latin West became apparent. This had been fortified and strengthened by separating 395. In addition, it seems to have been a disadvantage that moving money and troops from east to west was now much more cumbersome than before; this factor may have contributed to the continued existence of the east and the ultimate collapse of western Rome. Around 400 there was almost a war between East and West Rome due to rivalries at the two imperial courts.

From the point of view of contemporaries, the time seems to be Division of the empire 476 to have ended - from then on there was again only one Roman emperor, the one in Constantinople. After the extinction of the western empire, rule over the west was now with him, even if it was delegated to the rulers of the Germanic empires until further notice. Still emperor Justinian I. 140 years after the division of the empire, however, made it clear that he was willing to actually enforce these claims again: The idea of ​​imperial unity ultimately outlived the division of 395 by at least 200 years. 597 still seems to be Kaiser Mauricios to have had the concept applied two centuries earlier in mind when he decreed that after his death his older son should reside in Constantinople, but his younger son in Rome as emperor - however, this plan was made in 602 by the extermination of the imperial family by de usurper Phocas nullified.