Why are so many poor people fat?

Eating Healthy - A Question of Money?

The German citizens are reaching for fast food, ready-made products and sweets more and more frequently. In particular, people with low incomes and poorly educated people eat worse than those with higher incomes. But it's not just about the money. 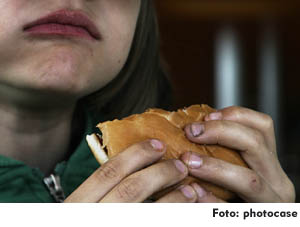 "Poverty is not the main problem of the lower class. It is the massive consumption of fast food and TV." With this provocative statement, the sociologist Paul Nolte sparked discussions at the end of 2003. In an article in the weekly newspaper Die Zeit he deals, among other things, with the growing number of overweight children. The social critic considers it a legend that "good and sensible nutrition" is expensive. If not because of their wallet, why is it that socially disadvantaged people eat less healthily than those who earn better? And is this claim even true?

There is clear evidence that a low income and a low professional status or educational qualification entail a higher risk of obesity. In addition, people on low incomes also exercise less, smoke more, have higher workloads and live in poorer housing conditions. Accordingly, the susceptibility to cardiovascular diseases, diabetes mellitus and numerous other diseases increases.

Children who are already growing up in poverty are more likely to be overweight than sons and daughters of wealthy parents. The school entrance examinations show this anew every year. And although these connections have been evident for decades, there are no representative surveys in Germany on nutrition in poverty or in income levels close to poverty. This is because poor households often do not take part in the large cross-sectional studies, such as the National Consumption Study. Despite these shortcomings, various studies show a connection between social class and the frequency of food consumption. Socially disadvantaged people tend to eat less fresh fruit and vegetables, dairy products, fresh meat and low-fat meat products. Compared to better-off households, they eat more canned goods, high-fat meat and cheap sausages. The proportion of finished and semi-finished products with a high fat content and low nutrient density, such as French fries, is also particularly high.

Poor children eat less whole-grain bread, fruit and vegetables and instead resort to lemonade, chips and fast food more often. The historian Nolte rightly claims: "Any meal prepared at home made from potatoes and vegetables, from wholemeal bread and cheese is cheaper than regular food in takeaways and fast-food restaurants." Realistically, the Hartz IV rate is too low to only eat outside the home. But it is also a fact that white bread costs even less than wholemeal bread and canned foods are in many cases cheaper than fresh vegetables. On average, whole food - even if no organic products are bought - is a third more expensive than "cheap" food. Scientists from Bremen calculated this in a market study back in the 1990s. There are no more up-to-date or more precise data. Because the exact costs of a healthy diet can only be calculated with the help of complete diet plans that extend over a longer period of time. 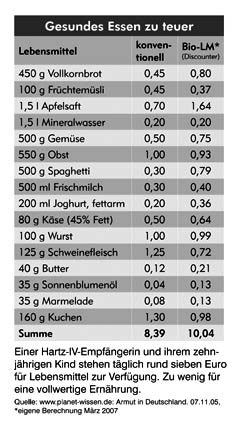 An experiment by the television program Planet Wissen was less complex. A reporter for the magazine had the German Nutrition Society (DGE) put together the daily ration for a 35-year-old woman and a ten-year-old child. Even in a very cheap supermarket, he paid 8.39 euros to buy the recommended groceries. If you were to prefer organic products you would even get at least ten euros, even if you only buy them in discount stores (see table). Since the mother receives unemployment benefit II, she and her child only have a good seven euros a day for food and drink. For a balanced diet, she would have to spend 40 euros more each month than the state has planned.

The example mentioned also does not take into account the social aspects of eating and drinking. Almost every social gathering - whether in a pub, cafe or at home - also includes eating. Who can imagine a coffee party without coffee or a children's birthday party without cake? Having to forego such activities is "almost as bad as solitary confinement," writes Martin Bucher in his thesis. The cook and qualified oecotrophologist carried out a self-experiment at the end of the 1980s and lived for a month on the daily rate of social assistance, at that time still 6.80 D-Marks. "For myself, I have managed to nourish myself (...) with my knowledge and skills without suffering from nutritional deficiency symptoms, but: Eating does not just mean eating." There was no money left to invite friends or meet in bars.

Bucher's self-experiment also makes it clear that eat healthy with little money is only possible if you always shop where it is cheapest, take advantage of special offers and keep stocks rationally. But poor families in particular lack the opportunities and prerequisites for this. While the television is standard equipment in Germany, a freezer is a luxury. Some apartments don't even have a cool storage cellar. You can often save money by making bulk purchases - provided you have a car with which you can transport large quantities. In some cases, poor households do not use bulk packs because they lack the money for them, especially at the end of the month.

Such examples show how low income indirectly means that poor households cannot make optimal use of their limited budget. If you want to eat healthily with little money and limited room for maneuver, you need more budgetary skill than an average earner. But that is exactly what is lacking more and more people - across all social classes.

The GESA poverty study in Gießen describes how important kitchen and housekeeping skills are for eating and drinking behavior using 15 sample families. Among the families with low incomes, there are definitely households that eat a variety of foods and, for example, process harvest products from their own gardens. The women questioned grew up in families who, despite their low social status, placed great value on a varied diet. However, other families eat too one-sidedly and too fat and therefore not healthy. Not only do they lack the skills and abilities to prepare meals, they also lack an interest in nutrition in general.

Eating healthily: Everyday problems are in the foreground

For most people living in poverty, their unhealthy diet is simply not the biggest problem they need to solve immediately. A survey of 100 Ulm welfare recipients showed that for almost all of the women, coping with everyday problems was more important than changing their eating habits. As you'd expect, they chose foods primarily based on price. Surprisingly, however, their children's preferences are just as important to them. They want to do something good for their children to compensate them for poverty-related burdens and to spare them the outsider status in school and kindergarten. Branded chocolate bars and greasy snacks are more likely to end up in the school bag than cheese bread and apples. And the kids will certainly not choose the "healthy" option of their own accord.

Financial poverty and the social situation associated with it also have an indirect influence on eating habits at this point. With the paradoxical result that the families, contrary to their intention to buy cheaply, resort to expensive fast food and sweets. Because a tight household budget always has an impact on the options for action, scope for decision-making and priorities of those affected. Nevertheless, lack of money does not lead to malnutrition in the same way for all people. Housekeeping skills and awareness of healthy eating also play a crucial role. A healthy lifestyle is therefore not just a question of money.