Theologian on Islam and fundamental rights: "Enlightenment is not complete"

A burqa ban is possible, a minaret ban is illegal, says the director of the Institute for Human Rights, Heiner Bielefeldt. He considers the "hard core of Islamophobia" to be racism in liberal camouflage. 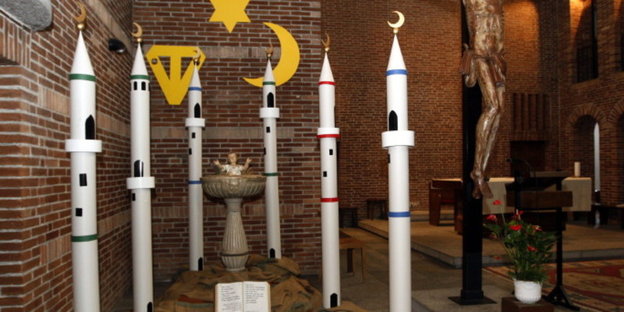 In the church of Sacro Cuore in Bellinzona, the capital of Ticino, there is a nativity scene with minarets around two meters high. The work is intended to stimulate reflection and dialogue. Image: ap

taz: Mr. Bielefeldt, in Switzerland the construction of minarets is banned, in France the burqa is banned, and in Germany teachers in many federal states are no longer allowed to wear headscarves. Do such bans violate the religious freedom of Muslims, or are human rights being enforced against a repressive religion?

Heiner Bielefeldt: You have to differentiate. The burqa is actually misogynistic and unbearable. The fact that a woman is prevented from showing her face takes away her individuality. This can in no way be justified with religious freedom. So I can understand the ban demand. But I doubt whether it makes sense. What is gained when the women affected cannot even leave the house?

The headscarf itself is not prohibited. In Germany, the main question is whether it violates state neutrality when teachers wear religious clothing in school. The Constitutional Court has allowed the restriction of religious freedom in civil service, but demanded strict equal treatment of religions ...

… which is obviously missing in the Swiss minaret ban.

Yes, there isn't even a reasonable reason to forbid the building of minarets in particular. One can only see this as a targeted symbol of rejection and marginalization.

Heiner Bielefeldt: At the end of the year, the 51-year-old Catholic theologian and philosopher is leaving the office he has held since 2003 as director of the state-funded German Institute for Human Rights in Berlin. Before that he taught in Bielefeld.

In September he took over the first German chair for human rights and human rights policy at the University of Erlangen-Nuremberg. On the subject he published inter alia. the book "Muslims in the secular constitutional state - integration opportunities through religious freedom" (transcript, 2003).

Survey: According to a recent survey by Infratest dimap, 36 percent of German citizens are "very worried" about the spread of Islam in Germany. 39 percent have "a little concern" and only 22 percent have no such fear. After the Swiss referendum on a minaret ban, 48 percent of German citizens spoke out against such a ban in an Emnid poll, and 38 percent were in favor.

Muslims: According to a study by the Federal Office for Migration, around four million Muslims live in this country, 45 percent of whom are German citizens. 36 percent describe themselves as "strongly believing", every second as "rather believing". 70 percent of Muslim women never wear a headscarf. 7 percent of Muslim female students stay away from physical education and swimming lessons for religious reasons. (chr)

Why is criticism of Islam so present at the moment?

The hard core of Islamophobia is racist. The aversion to foreigners or those who look different is now often passed off as a criticism of religion, because here you can connect with bourgeois and left-wing liberal circles.

Many critics of Islam do not speak out against foreigners in principle, but refer to human rights.

It annoys me a lot when a hate party like "Politically Incorrect" postulates that it stands up for the Basic Law and human rights. They pose as heroes of the Enlightenment by slamming minorities. Isn't that silly? But it makes the criticism of Islam so colorful that it specifically refers to liberal values ​​such as gender equality or the acceptance of homosexuality.

Aren't women and homosexuals justified in fear of Islam?

What does "before Islam" mean? Of course there is patriarchal and homophobic violence in Islamic milieus. There is nothing to gloss over. But why is this backwardness primarily interpreted religiously instead of also being explained sociologically?

Where are the limits of admissible criticism of religion?

One must be able to discuss religious questions, also robustly, also satirically. Freedom of expression also applies to blanket, aggressive and tasteless accusations. However, the limit has been reached where it is no longer a matter of discussion, but of mere defamation and exclusion.

Many Muslims react sensitively to criticism of religion, as the discussion about the Mohammed cartoons has shown.

Legally, there can be no special protection for Muslims. This is an expression of their recognition as equals in this society. However, it is a question of style whether one takes into account that many Muslims belong to educationally disadvantaged classes and are less able to deal with provocations.

The writer Ralph Giordano warns that Muslims have religiously sanctioned permission to deceive when confronting unbelievers.

This is dangerous exclusion if the other side is accused of structural mendacity. Whoever enters into this logic will no longer find out from it. Rather, each interlocutor should first be assumed to be credible until the contrary is proven.

Is it permissible to require representatives of Islam in Germany to adhere to the values ​​of the Basic Law?

The Basic Law is the basis for living together in Germany. To this end, a religion like Islam must also behave positively. An express commitment should only be requested from representatives of the association, not from individual Muslims.

Because the Basic Law is a matter of course for Muslims who grew up here. I can understand that they react helplessly, surprised and angry when they are asked to make special confessions - often in an inquisitorial tone. Nobody asks a Christian person how certain passages in the Bible are compatible with the Basic Law.

That may be true. But in the Koran it is explicitly stated: "Men are responsible for women."

Equal rights for men and women is an inviolable requirement of the Basic Law that religious communities must adhere to, for example if they want to give religious instruction in public schools. Otherwise it is a task of theological interpretation to bring such Quranic verses into harmony with the requirements of the Basic Law. The same applies to certain passages in the Bible, where it says, for example: "The woman is the reflection of the man." It is crucial that the results of the Basic Law are accepted. Christianity, with its university chairs, is certainly ahead of European Islam in this academic-theological task.

Isn't Islam also having a harder time here because it is assumed that the Koran was literally dictated by Allah?

That certainly doesn't make the task any easier. But even so far, Islamic theology has developed leeway by emphasizing that certain statements of the Koran are to be seen in relation to the situation in a medieval civil war - for example, when they gave permission for plural marriage for men as a contribution to the care of widows at the time and classify orphans.

Is Christianity easier to integrate into a worldly order because the Bible says: "Give the emperor what is the emperor's and God what is God"?

Some in the Christian churches believe that. However, they overlook the fact that in Christianity too, especially in the Catholic Church, it was a long, conflict-ridden process before human rights and religious freedom were fully recognized. Compared to Islam, the Christian churches only have a head start in terms of experience in dealing with the secular state. It would be wrong to say that Christians have already passed the Enlightenment and Islam still has it to go. Rather, this process is not completed in both religions.