Great Britain is richer than France

Investment in Africa: France and the UK dominate European investments

Europe's economic relations with Africa have a long tradition: They go back to the era of the colonization of the “black continent” in the 19th century by the leading European seafaring nations, including Great Britain, France and Portugal in particular. The former colonial powers left their mark on Africa and still play a particularly strong role today as investors in their respective areas of influence; these have kept the respective language of the Europeans as the general lingua franca and accordingly include the Anglophone, Francophone and Lusophone (Portuguese-speaking) countries of Africa. South of the Sahara, the Anglophone countries are mainly to be found in the east, south and southeast of the continent and the Francophone countries in the west, while the Lusophone countries consist of Angola in the southwest, Mozambique in the southeast and the small island state of São Tomé and Principe. Since the independence of the former colonial areas, however, engagements by France and Great Britain in particular have also been observed in priority countries on the continent beyond their traditional areas of influence.

According to the Africa Investment Report 2016 (annual publication of “fDi Markets” - online database for globalization by the Financial Times), Western Europe was by far the most important region of origin for capital investments in 2015 with US $ 30.1 billion. This corresponded to around 45 percent of the total investment inflows in the year, but at the same time a decrease of 38 percent compared to the previous year. In the following year 2016, however, Western Europe was ousted by Asia-Pacific and the Middle East to third place among the most important regions of origin for investment capital in Africa. As the table of the main countries of origin of direct investments by capital stock shows, four Western European countries alone were among the “top ten” in the past ten years: the United Kingdom and France, followed by Italy and Switzerland by a long way. 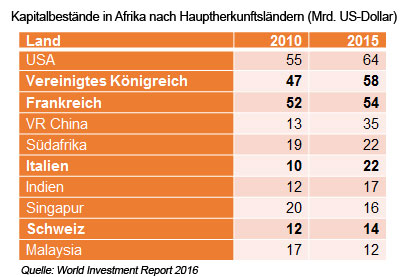 Among the Western European investors, investors from France, the United Kingdom and Italy in particular are very active on the African continent, as the table below of so-called greenfield investments (new projects) between 2013 and 2015 shows. 2014 was a particularly strong year for EU engagements on the African continent. This was mainly due to the 50 or so new projects in France, mainly in the Maghreb states of North Africa, a traditional area of ​​influence of the French. Italian greenfield investments increased dramatically in 2015, among other things, due, among other things, to a number of government and private sector initiatives in previous years to encourage Italian industry's engagements in Africa. 2013 was a record year for Spain's investments in Africa, mainly due to some initiatives to promote tourism projects in Africa. In 2014 and 2015, there was also a lively commitment by German industry in Africa, which (according to an Ifo research report from 2015, “Engagement of German Business in African Countries”) concentrated mainly on South Africa south of the Sahara, followed by Mauritius by a long way Namibia, Nigeria, Angola, Kenya, Ghana and Tanzania.

Lively investment activity from Great Britain had already been observed in previous years, as can be seen from a study by a consulting agency from 2016 ("Overview of foreign direct investment in Africa", King & Wood Mallesons). After that, the United Kingdom was again the investor country with the most projects in Africa in 2013, 104 in number, worth a total of 4.6 billion US dollars. Services, especially business services, financial services and telecommunications, are named as the most important sectors. Among the most important target countries for European investors in Sub-Saharan Africa, Nigeria stands out, as the most populous country with a wide range of industrial sectors offers particularly diverse opportunities for investors. 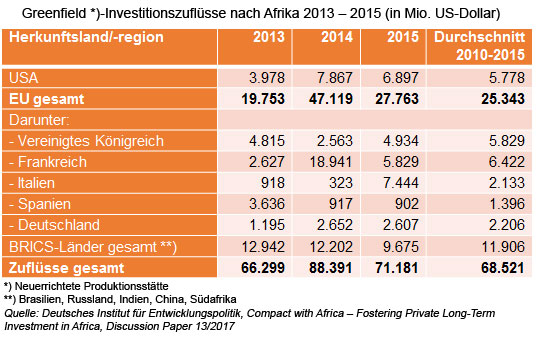 British economy in the new “Scramble for Africa”?

The leading 100 or so companies listed on the London Stock Exchange, mostly of British origin, were the target of a campaign by the activist organization “War on Want” in 2017. It is directed against the so-called “new colonialist invasion” of the African continent, known as the “scramble for Africa” during the colonial era. According to the activists, the corporations are quietly tearing Africa's raw materials under the nail - a criticism that so far mainly Chinese companies have been exposed to. According to the report "The New Colonialism: Britain's scramble for Africa's energy and mineral resources" (further details at: https://inews.co.uk/essentials/news/british-companies-leading-new-scramble-africa-control- raw-materials-worth-800bn /) these companies control African raw materials worth a total of 810 billion British pounds (around 747 billion euros). One of the criticisms of this is a new development aid concept by the British government in which the Development Ministry, Department for International Development (DfID), is involved together with the Foreign Office: So-called High Level Prosperity Partnerships (HLPP) are primarily intended to provide investment opportunities for British companies create in Africa. So far, five countries have been selected for this initiative - Angola, Côte d’Ivoire, Ghana, Mozambique and Tanzania - and thus predominantly countries with newly discovered oil and gas reserves.

For a period of several years (2015 to 2017), the DfID had provided a special investment fund worth GBP 735 million for the Commonwealth Development Corporation (CDC), the British development finance company specializing in private-sector projects. This was the first state capital injection for the CDC in around two decades. The British government combines this with the express goal of reducing the dependence of poor countries on donor funds.

For some years now, international companies of British origin have also turned their attention to the francophone countries of West Africa, some of which are among the largest economies in Sub-Saharan Africa. These include above all Côte d'Ivoire and Cameroon, which, according to a study by the Standard Chartered Bank (“Francophone Africa a top destination for foreign investment”) between 2003 and 2011 with investment inflows of 47 billion US dollars, accounted for around 2 percent of total inflows of direct investment in Africa. International engagements in the francophone region are made easier by the increasing spread of English skills and efforts to diversify economic relations with foreign countries, i.e. by reducing French dominance.

France seeks to expand its sphere of influence on the African continent beyond its traditional domains in West and North Africa. Various strategies and strategic proposals for achieving this goal are set out in a comprehensive document from 2013 on behalf of the French Minister of Economics and Finance: A partnership for the future: 15 proposals for building a new economic relationship between Africa and France. The investment fund (Fonds d’Investissement et de Soutien aux Entreprises en Afrique / FISEA) set up by the AFD (Agence Française de Développement) in 2009 is an important instrument for strengthening French commitments throughout sub-Saharan Africa. This fund provides African companies with long-term capital as well as technical advice, amounting to 50 million euros annually, and is intended to increasingly support partnerships with French companies via the AFD financing company Proparco.

At the beginning of 2017, another private investment fund for French engagements in Africa was set up, the French African Fund or Fonds Franco-Africain (FFA), as the first investment fund to promote small and medium-sized enterprises in both Africa and France. The fund is managed by AfricInvest, a leading pan-African private investment company with a capital stock of around EUR 1 billion and branches in France as well as in six countries in North Africa (Algeria, Morocco, Tunisia) and Sub-Saharan Africa (Côte d'Ivoire, Kenya, Nigeria ).

Kenya and Nigeria are the two Anglophone sub-Saharan countries that have been the focus of the French for several years. In 2014, for example, a French-African Foundation for Growth was launched in Nigeria, an initiative by the French with the aim of increasing their investment commitments in the largest and most populous economy in Sub-Saharan Africa. In Kenya, the focus country of the East African Community (EAC), the French have risen to become the second largest donor after China, with particular engagements in the energy, water and sanitation, transport and urban development sectors. A particular priority of bilateral cooperation is higher education and, in particular, the promotion of French, which is the most widely taught foreign language in the Anglophone country.

Even under the Hollande government, the Paris climate summit in 2015 announced that French investments in renewable energies such as wind, solar and hydropower as well as other environmental protection projects in French-speaking West Africa and other African regions would double to 2 billion euros by 2020. Until then French contributions to combating desertification and other effects of climate change in Africa are also to be tripled to 1 billion euros per year.

Portugal's special relationship with the former colonies in Africa

The annual statistics of the United Nations Conference on Trade and Development (UNCTAD) show that the former Portuguese colonies in Africa - Angola, Mozambique and the small town of São Tomé and Principe - are among the countries that have attracted a particularly large number of investors from the Attract abroad, measured by population. Mozambique, in particular, is attractive to foreign corporations because of its extensive natural gas reserves and mineral deposits. The former colonial power Portugal is still the largest investor in the old areas of influence, where the Portuguese also provide the largest group of foreign workers.

The former colonies were popular retreat areas for unemployed Portuguese, especially in the past crisis years. There are around 23,000 Portuguese residents in Mozambique, around 126,000 in Angola, according to official figures, and up to 200,000 according to private estimates. Relations between Portugal and Angola are particularly close, especially with the Angolan upper class, who in turn act as major investors in Portugal.

The EU-Africa Infrastructure Trust Fund (EU-AITF) has been used as an instrument for joint financing of important infrastructure projects in sub-Saharan Africa for around ten years. The aim is to improve access to energy, transport, water and sanitary facilities as well as communication services for the general public. The fund promotes investments in these areas through various types of grants, combined with long-term loans from development banks, and is considered to be an important contribution to poverty reduction on the African continent.

In recent years, the European Union has been increasingly combining development aid grants with capital resources from the private sector, above all in order to be able to better finance large infrastructure projects in Africa. One example of this is the Energy Access Ventures Fund, which, in collaboration with the French AFD and the UK CDC, specifically finances renewable energy projects in East Africa, including a geothermal power plant and a wind power plant in Kenya. Another example is the EU-supported Electricity Access Fund, which is managed by the private Paris-based investment company Astor Capital Partners and, with the participation of the EIB (European Investment Bank), is to invest around 65 million euros in small and medium-sized companies over several years , with the aim of providing electricity to around 1 million low-income sections of the population.

Another European investment company for projects in Sub-Saharan Africa was set up in 2016 by three development banks (FMO Development Bank and Rabobank, Netherlands, and Norfund, Norway) with a capital stock of 660 million US dollars. The new company is called Arise and is specifically intended to enable capital contributions (minority interests) in financing companies in over 20 countries - including Kenya, Tanzania and Zambia. These enable the respective financial providers to finance loans to local small and medium-sized companies. 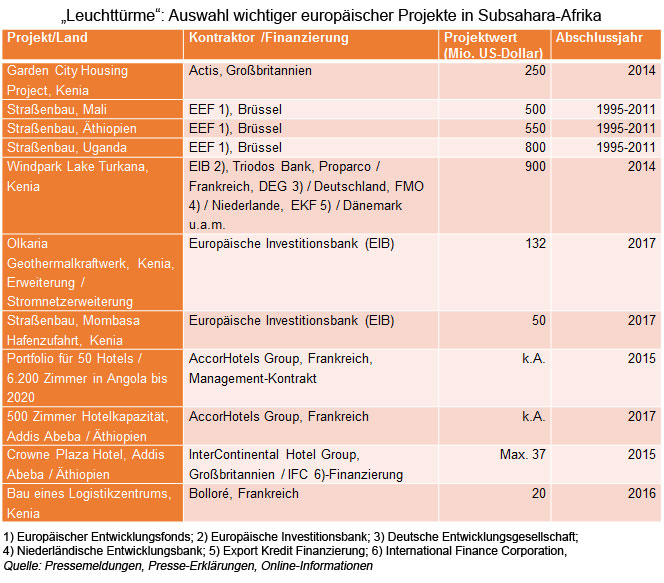 This entry was posted in General, Markets and tagged Europe, Investments by Stefan Enders. Permanent link to the entry.
<?